The team is interested in magnetization configurations at the nanometer scale and their impact on the magnetic properties of materials. It can be thin layers, multilayers, super-lattices or arrays of small objects. We can study the formation and evolution of magnetic objects like domain walls, vortexes, skyrmions or magnons. We can elaborate networks of plots to study frustrated systems or to carry out bio inspired calculation. Multilayers of different materials can be functionalized for applications in the fields of magnetic printing, sensors, memories, information storage, etc.

Magnetic skyrmions are topologically nontrivial spin textures which hold great promise as stable information carriers in spintronic devices at the nanoscale. One of the major challenges for developing novel skyrmion-based memory and logic devices is fast and controlled creation of magnetic skyrmions at ambient conditions. We are studying the formation and the caracterisation of skyrmions in various material (Ferrimagnetic, Ferromagnetic) with various interfaces. We used field, current and light to control its creation and motion. 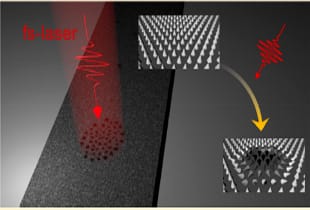 Artificial spin systems refer to the use of nanomagnets patterned by top-down techniques to mimic “spins”. The possibility to design “upon request” arbitrary network thanks to lithography and the possibility to determine completely the “spin” configuration with magnetic imaging offer a wide playground for statistical physics.

Recently, there have been impressive advances in the field of artificial intelligence. A striking example is Alphago, an algorithm developed by Google, which defeated world champion Lee Sedol in the game Go. However, in terms of energy consumption, the brain remains the absolute winner by four orders of magnitude. Indeed, today, brain-inspired algorithms are running on our current sequential computers, which have a very different architecture from that of the brain. If we want to build smart chips capable of cognitive tasks with low energy consumption, we need to build artificial synapses and neurons on huge parallel silicon arrays, bringing memory closer to processing. We aim to provide a new generation of bio-inspired magnetic devices for pattern recognition. Their functionality is based on the magnetic properties of an artificial spin ice in a Kagome geometry. The local control of the magnetic properties gives it a learning capability.

We are studying the possibility to manipulate magnetic anisotropy by interfacial strain transferred from a thermally controlled NiTi based shape memory alloy (SMA). We demonstrated that the shape memory effect in NiTi alloy can be used to reproducibly switch by 90 degrees the in-plane uniaxial anisotropy of a 20 nm thick nickel thin film during a thermal cycle.

We aim to develop a new approach for magnonic devices at the nanometer scale.  Magnonic devices rely on the coherent propagation of spin waves (SW) at the sub-micron length scale. Manipulation of spin-waves propagating inside sub-micrometer waveguides is at the core of promoting the practical application of these devices. We investigate a new paradigm in which magnetic domain walls (DW) are used as natural nanometer scale waveguides for spin waves. This highly innovative approach presents two main advantages.

First, by a judicious choice of excitation frequency only spin-waves in the domain walls are generated. This allows working with confined SW with frequency compatible with standard and future communication protocols. Second, DW waveguides are reconfigurable,  so we can design and re-design the waveguides form and so the functionality of the SWDs.