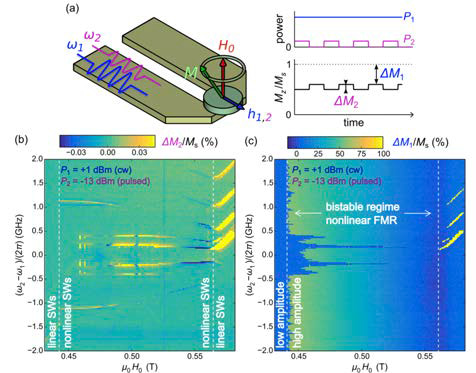 Image caption: (a) Principle of two-tone nonlinear FMR experiment. (b) SW spectroscopy map at fixed frequency ω1 of the main pumping in the plane (H0, ω2-ω1). (c) Simultaneous measurement of the averaged SW dynamics, revealing that the weak pumping at ω2 can resonantly destabilize the high amplitude branch of nonlinear FMR.

With the MARIN project, we aim to realise experimentally such a magnonic reservoir computer. The MARIN project will investigate experimentally and theoretically the capacity of SWs in micro- and nanostructured thin films to satisfy the three basic requirements of reservoir computing, namely: (i) approximation – whether similar inputs result in similar outputs; (ii) separability – whether distinct input classes result in distinct output classes; and (iii) fading memory – how quickly inputs are forgotten over time. The basic control mechanism is the nonlinear coupling between SWs, which allows orthogonal eigenmodes of the equilibrium state to interact with each other as their amplitudes increase. Because such coupling also involves thresholding events, like for spiking neurons, we can achieve computational tasks with a cognitive nature like classification. This will be applied to demonstrate advanced signal recognition, e.g. on time-series, as a first step towards a proof-of-concept of efficient analogue non-Boolean operations.