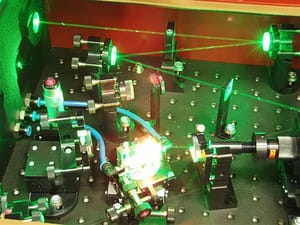 In 2007, a team from Radboud University showed, on a single GdFeCo alloy compound, that a bit of magnetic information can be written in a few picoseconds without a magnetic field using a single femtosecond laser pulse. Since 2011, the “nanomagnetism and spin electronics” team at the Institut Jean Lamour has extended this effect to many types of materials with the appearance of new behaviors. In the PLUS project, we propose to study in depth the mechanisms of ultrafast reversal of magnetization (on the femtosecond scale) of a magnetic nanostructure (magnetic layer, pad etc…) either under the direct action of a femtosecond laser pulse, or under the action of an electron pulse. The project is of a very fundamental nature and focuses on the identification of materials and processes that will eventually make it possible to propose a magnetic information storage technology with increased writing speed (by a factor of 1000) and reduced energy consumption.